Antarctica: The Last Frontier for Radiology

As if the North Slope and the Aleutians in Alaska aren’t remote enough, Brad Montagne, Field Service Engineer for an independent service organization in Alaska, recently traveled to Antarctica to perform maintenance on radiology equipment at the South Pole and McMurdo Station.  How he got from the top of the globe to the bottom is quite a story.  Brad’s fiancé is a nurse practitioner based at the South Pole, where she noticed a broken X-ray machine and asked Brad if he could fix it.  He said, “Yeah, definitely!”  The company, USAP (United States Antarctic Program), then contacted him. Brad had to go through a lot of testing and qualifications before he could go, including chest X-rays, dental X-rays, and physicals. It took approximately 10 days of preparation. “They are very careful about who goes to the South Pole and McMurdo Station, so they make sure you're not going to have a problem.” Technically the University of Texas handles the medical for the South Pole and McMurdo Station, so Brad was part of the UT team traveling there.  All the flights to the station are military and, the C-17s fly out of Christchurch, New Zealand. When they land, it’s on skis on an ice flow, not a runway. “It was just crazy landing on skis, it was nuts . . . they land by McMurdo on an ice flow, sea ice. That's what the runway is. Nothing's normal, it's too weird. You can see the weight of the plane bending the ice.”

Once in place, Brad got to work.  McMurdo Station is at sea level but, the South Pole is at a high altitude, 9600 feet, and a negative 100 degrees.  “…at the pole, the high altitude just hits you and, you can't do anything. You're going from sea level at McMurdo Station to 9,600 feet, it's quite a jump. I didn't think it would matter that much because I fly private aircraft where you can go up to 10,500 feet. But in that dry atmosphere at the pole, and given how cold it is, it's like a slap in the face. That is a harsh environment. I've never felt anything like that. And I live in Alaska, so I'm used to cold, but nothing like that. ”Despite the cold, the RaySafe X2 made it down to the pole and it worked.  At the station, the machine is a Control-X which was having calibration issues, so it needed to be tuned as well as having general maintenance performed.  Brad used the X2, to check and verify the work and set the machine correctly. Power is not constant and fluctuates quite a bit which makes calibrating the machines challenging.

“When I was down there, I fixed that issue, plus I had a chance to adjust and tune two extra units at the South Pole. They have a backup X-ray unit at McMurdo Station and a lot of dental units at both locations. There are two Mini-X units which are their diehard backup for all their X-ray requirements. While I was there I had nothing but time since I had to wait between flights, I tested everything out, including equipment that needed to be adjusted at the South Pole, they were quite a bit off, and needed to be tuned.” Brad was using the RaySafe X2 and the R/F sensor to test the equipment.

The station probably had five or six different kinds of machines that I was working on, and the station was using all of them. I printed out reports for them with the RaySafe View software so that they have verification all this equipment is working.”
Brad had an extraordinary experience in Antarctica and hopes to return someday soon. “USAP is building a new station down there at McMurdo and the plans are fantastic. It will be almost like a spaceship. After my Antarctica experience, I hope I will eventually be called to travel there again to help out with their new X-rays equipment.”

Learn more about the RaySafe X2 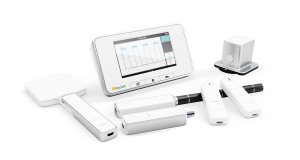