Dependable, trusted, reliable – these are the usual terms associated with Fluke Biomedical tools. But these are not just simple words; Fluke Biomedical analyzers are the embodiment of them. A powerful testament to the test equipment's reputation is a story where a set of tools spent two and a half years in a tub on the side of a road without being worse for wear. Rhiannon Thurmond of Houston has that story to tell.

Rhiannon has been a field service engineer for over 15 years and is the Biomed Operations Manager/FSE III for Ultimate Biomedical Solutions (UBS). She travels around the greater Houston area doing machine maintenance, basic electrical safety, temperature checks, necessary repairs, and solves other problems that may come up with the devices. She depends on many Fluke Biomedical tools to do her job, including a Fluke Biomedical VT Plus HF Gas Flow Analyzer, ProSim 4, and the ProSim SPOT Light. For her work in the Houston area, Rhiannon drives a truck and keeps all her test tools in their cases in a large tub for easy access and portability.

Less than a year after starting at UBS, Rhiannon was in her truck on the highway and on the way to a client when she heard a thud. The noise didn't register as important because she also keeps a 50 lb. weight in the back of the truck that she thought had rolled around, so she just kept driving. 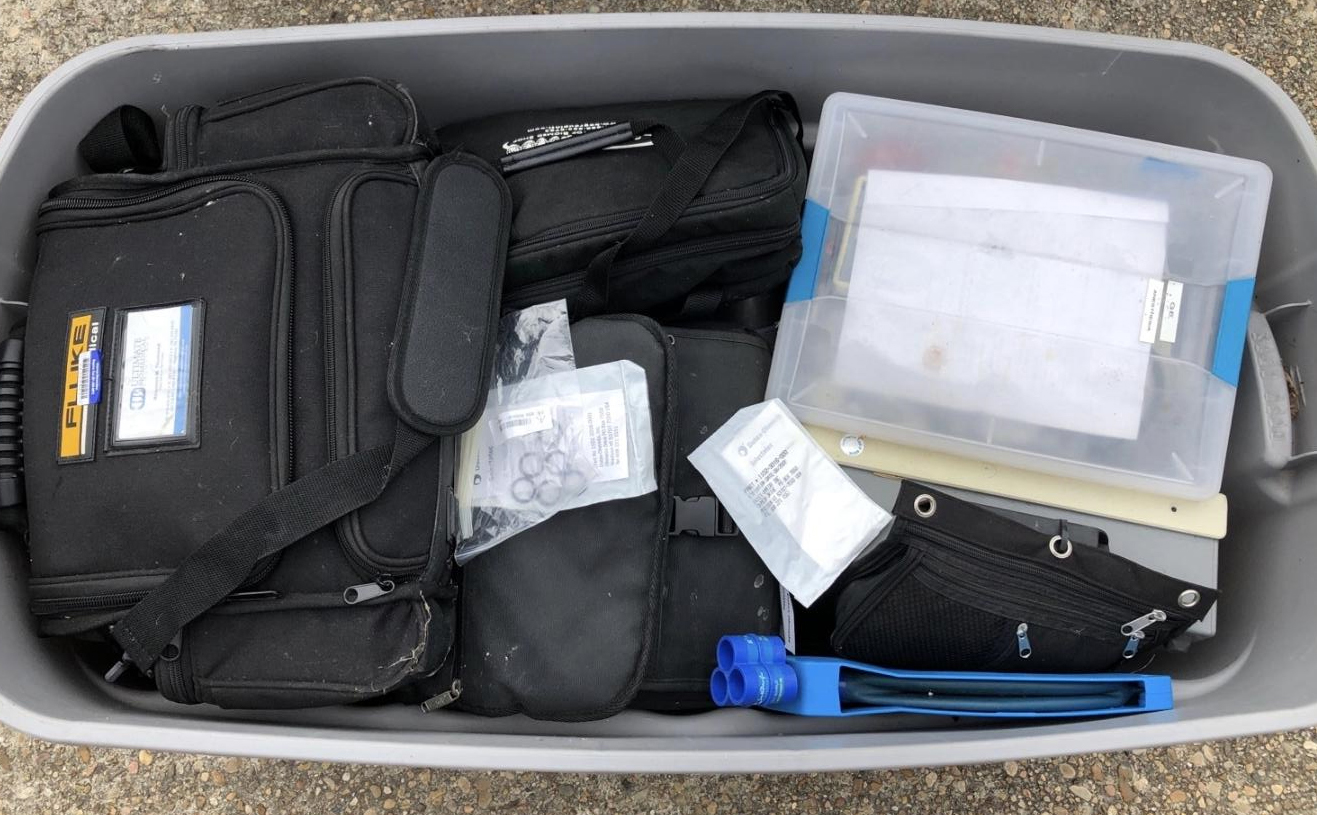 About 30 minutes later, the driver of an 18-wheeler pulled up next to her and indicated for her to roll down her window. When she did, he said: "Ma'am, your tailgate is open, and you are about to lose all of your equipment." Rhiannon immediately pulled over to check and realized that all she had left in the truck was a tool bag. She explained that "the big tub where I keep my Fluke Biomedical tools, the flow analyzer, my digital multimeter, my pressure meter, everything I have is in this tub, and it's gone. And I realized, man, that must've fallen out on Hardy Toll Road in Houston."

Now Rhiannon had a dilemma because she had an important client meeting 15 minutes after she lost all her test equipment. She called her CEO who told her to go to the client and he would send someone to try to find the tub. And they searched everywhere, high and low. Three different techs went up and down the same route, but they never found it. She went to the police station and filed a report. "I had just inventoried everything. But when you give over a list of inventory items and the device descriptions are;

And nobody knows what those devices are."

With no expectation of the equipment ever being found, Rhiannon purchased all-new test equipment. Then, in late 2020, she heard from a young man who was driving down the road and saw a big tub on the side of the highway. By good fortune, he tracked her down because Rhiannon had put her business card on every device she owned. The caller told her that he picked up the tub and when he got home and opened it, he didn't recognize what the tools were for, "but he told me, "Ma'am, it's filled with weird equipment with all these leads that says Fluke Biomedical." She was shocked and delighted to hear the tub had been recovered and gave the man a finders' reward.

The Best Part of the Story

For two and half years, the tub was subjected to the vagaries of Houston weather. Sun, heat, humidity, rain, and wind. Rhiannon said, "I don't know if y'all remember Hurricane Harvey down here, but it was a big deal with a lot of flooding. When I lost all that equipment a few months after Hurricane Harvey, parts of Houston were still underwater. Then, tropical storm Imelda happened after I lost the tub. That test equipment sat in that tub on the side of the highway through the flooding, then through Tropical Storm Imelda. Who knows, maybe it acted as a boat and it just traveled around." 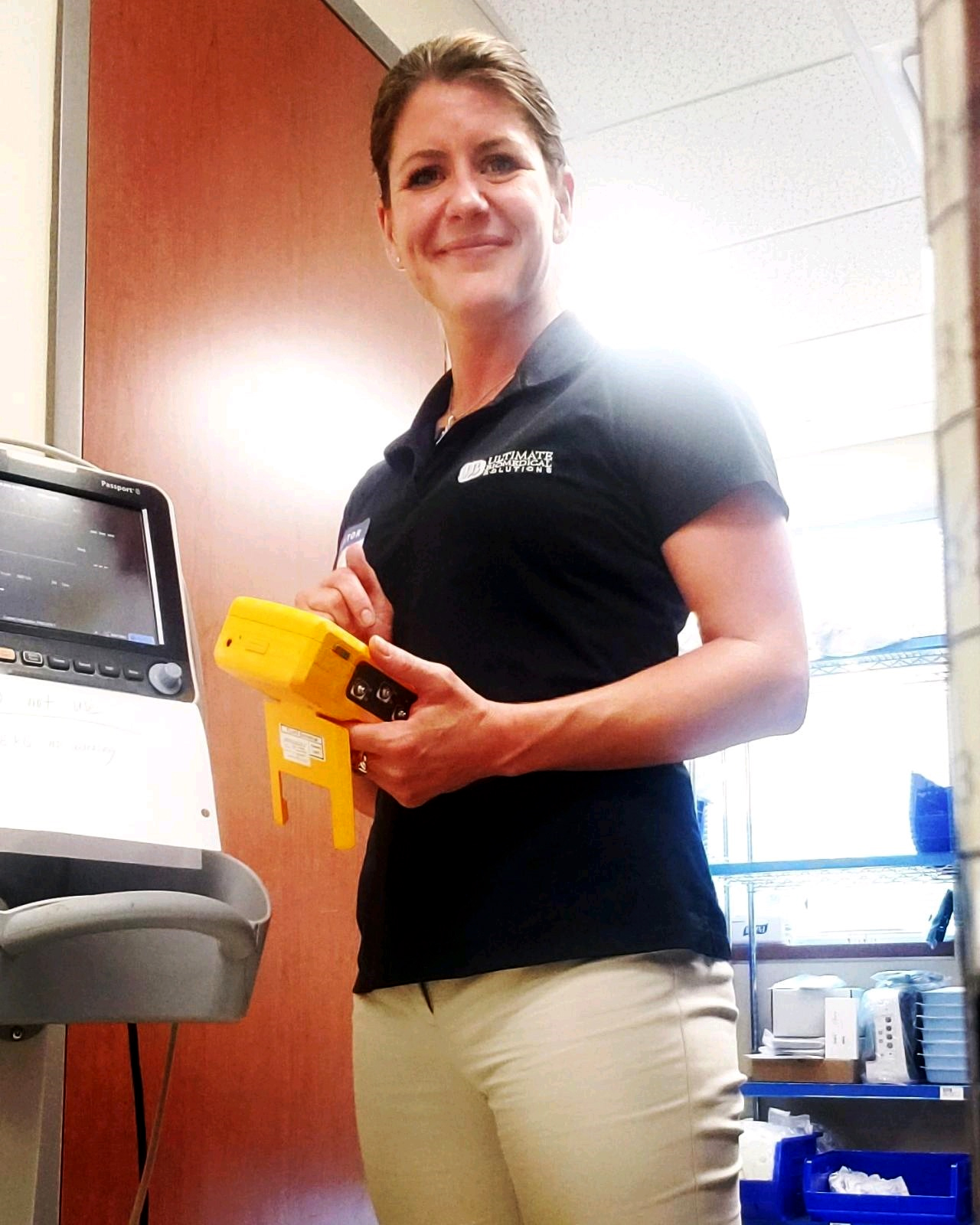 "I was impressed when I opened the box. I could tell that it had been sitting on the side of the road for a long time. It was full of spiders, dust, dirt, debris. There was some moisture in the bottom. There was a small crack in some of the devices. But I tell you what really blew me away; the ProSim4, my little patient simulator, my Fluke Biomedical ProSim4, which had been sitting unplugged for two and a half years. I pushed the power button, and you know what happened? The darn thing turned on! Then I started turning on everything else: turn on the SPOT Light, power on my voltmeter, check a fuse with it. I tested everything, and everything worked. Every single unit worked."

"How in the world did these devices sit on the side of the road for two and a half years and then come back working with no problems? There's so much moisture in the air here in Houston. There's so much humidity. I've left other electronics out, and they don't hold up. You get moisture behind the bezels. None of the devices that I had in that box were damaged, and no repairs were needed. The standoffs on the cases were all intact. The screens powered on perfectly. I didn't have any segments missing from my LCD screens that you would typically see when you have some corrosion or moisture on the circuit board. I didn't see any of these indicators. I don't know what Fluke Biomedical does, but it's some sort of magic. Then I sent it out for calibration, and when I got the report card back two weeks later, everything worked with minimal calibration needed. The tub literally sat on the highway, untouched, for two and a half years, and it all works.”

Rhiannon also had an older VT Plus, which was over ten years old before she acquired it. "This unit is actually an end-of-life unit that held on... I'm still sitting here in awe over the fact that I had a 12-year-old Fluke Biomedical device that is considered an obsolete device. When I sent it out to be checked, the company that does calibration verifications was flabbergasted too."

After flying out of the back of a truck at 60 miles an hour and spending two and half years on the side of a highway, the test equipment in the tub is back at work. UBS had a new employee who needed a set of test equipment and was given the tested and verified equipment. It's been back in use for the last six months with no problems.

With Fluke Biomedical, it all comes down to patient and operator safety. Expert service technicians like Rhiannon know that the tools they are using on critical medical devices can be trusted to be dependable and reliable. And, happily, it doesn't take tumbling out of the back of a truck to prove that.